I’VE BEEN HERE THE WHOLE TIME…

I’m very happy to announce that the name of the third Empty City Squares album will be, The Disappearing Architect. I’m also happy to reveal the cover art that will be used for it.

Those of you who know me and know of my 15 minute farcical media saga, also know that Christina Wilkie and Rachel Maddow, as well as their network enablers CNBC, MSNBC, and their parent NBCUNIVERSAL, slandered and defamed me in order to further their own careers and gain kudos from their cohorts in exposing what they thought, in all their glorious delusion (and narrative du jour), was yet one more unexamined and nefarious tentacle of the evil and monstrous Trump criminal empire. The fact that no other media outlets picked up the story is testament enough to its lack of veracity. Nevertheless it impacted me negatively, and that is something I will NEVER forget or forgive.

While I wrote a lengthy response to this ridiculous episode in June of 2020, which you can find here, http://www.fotiadis.net/history-rhymes/, this album will be the culmination of much thinking and contemplation about what happened to me since then, and the present iteration of American society that we now find ourselves in. The two are in fact intertwined.

Before June of 2018, I thought McCarthyism and the blacklists that had occurred as a result, had been relegated to the historical repository of dark American chapters, and were part of the past. Well, I was wrong. What I saw from the beginning of Trump’s PR candidacy and throughout his unanticipated presidency, especially in the months leading up to this last election, was a rising tide of polarization, mutual hatred and distrust, and that dead giveaway of all civil unrest headed towards conflict (i.e. civil war) – the labeling and condemnations of “otherness” of one side against another. While historians, sociologists and political theorists can analyze ad nauseum what led us to this very unfortunate place, there is no doubt in my mind that the media was, and continues to be, an enabler. Maddow herself in her sanctimony laden “commentary”, compared me to a cockroach “scrambling when the lights came on”. The mindless yet vicious followers of both Wilkie and Maddow on twitter, made their instant and reflexive hatred and loathing of me perfectly clear when they called me monikers like “Albert Speer” and used the hashtag #disappearingarchitect among many more, when referring to me. All because they chose to march in lock-step and make incorrect assumptions about who I was and what I had done, blindly believing the propaganda that had been slung at them by these ridiculous charlatans posing as journalists. The title of this album comes from that, and the album partially speaks to that point.

But there is more. We are pawns. Maddow, Wilkie, and their networks, as fraudulent and as well paid as they are, are all just cutouts. Mouthpieces. We are being manipulated by greater nefarious forces that control not only the flow of information to us, but also what that information is supposed to mean to us. These same forces are also attempting to control the language we use, and as a result, the opinions we formulate. We no longer live in a free society, rather, we are being conditioned to believe that the very thoughts we are formulating are subject to judgement and should in fact be legislated. The Technology that we are now addicted to and can hold in the palm of our hand, is central to this. And the Dystopian Technocracy (run by Silicon Valley Plutocrats and their nefarious “allies”), which has resulted and that we now find ourselves mired in, is slowly seeping into every corner of our lives in all of its Orwellian glory. The “doxxing”, the “cancel culture”, the calls for retribution (ideological veiled as political), are all part of a larger system of “social credit” which has taken root. It is up to us as to whether we allow it to control our minds or not. If you have any shred of individual identity left, any ego at all, you know this direction is wrong, because that nagging, gnawing feeling in your gut is telling you so. It is counter-intuitive to the human spirit. It is in direct opposition to the idea of expressing one’s freedom and individuality – the very sparks that ignited artistic expression since the dawn of human consciousness, and the natural innate desire we all have to control the direction of our thoughts and as a result, our life. Individuality and freedom of expression shouldn’t be muzzled (in fact history has proven they CANNOT be muzzled), instead they should be celebrated. But as every day passes, and the world outside continues to change into something unrecognizable, it becomes increasingly difficult to maintain a belief in yourself and your values of individual liberty, let alone a system that is supposed to protect both. If you allow it, words like “freedom”, “liberty” and “self-determination”, which are already frowned upon by the so called “intelligentsia”, and which are being incorrectly, but deliberately, recast as synonyms of greed, self-interest, and (fill-in-the-blank)-phobia, will eventually be vilified and ultimately declared criminal. It’s simply a matter of time.

All of this, which has been amplified a hundred-fold with the advent of COVID-19, (which is acting as much as a catalyst for “change” as it is a disease) and all of the politicization and misinformation which has followed in its wake, has left me holding no one above suspicion. After what I’ve been through and experienced, WHY should I believe anything the media is telling me, OR the Government for that matter? Opportunists of all stripes who seek power and control over you and I, and who will never let any crisis go to waste to further their agendas, abound. Nothing is off the table. All I know, is that I refuse to be controlled, to be told what to say, what to think, and how to behave. As I said in June 2020 when History Rhymes and Parmenides were released as a single (and will be also be on this album), ask yourself CUI BONO? Totalitarians and would be usurpers of power may don new disguises and hatch new slogans, but the deathlike stench they emit, despite their attempts to cloak it with the false aromas of seemingly positive phrases like “social justice” or “making America great again”, will always cut through. If your sense of smell is acute enough, it is immediately recognizable and familiar.

As I forge ahead writing and recording, The Disappearing Architect has simultaneously become the reclamation of MY identity – an identity that a corrupted and propagandized media tried to unsuccessfully hijack for their own self-interest. It has become my personal declaration of independence, and my coping mechanism. But it is also a clarion call to all my fellow creatives who have been wronged and unfairly vilified by the envy and jealousy of those with far less talent, but far bigger mouthpieces. The Disappearing Architect will be a raised middle finger to them all.

While I had originally slated the release of this album for the end of 2020, the bizarre and unfortunate events of this last year have thrown the proverbial monkey wrench into the works. The project has been delayed. I am now targeting a June 2021 digital release. There will be another announcement soon about a possible vinyl release as well as more details on the songs which will be on the album.

A word on the cover art. Yes, I had designed some buildings for the company of the now lame duck President of the United States and former game show host, when he was still a real estate developer. And some of those conceptual designs were literally recycled. The tower you see in the cover art was originally a concept design (in the form of an empty 3D model – no floor plans – just a shell of a building, and an idea, as it were), that I did way back in 2011 for a tower in Kazakhstan. In 2015 I was rather incredulously asked to literally “photoshop” that same 3D model (over the course of a weekend I might add), into an imaginary site to tower over the Moscow skyline. Ridiculous right? All I can say is that while truth is often stranger than fiction, cheapskates – especially in the real estate business – will always reign supreme.

Regardless, since no one ever PAID ME for this effort, the design and the intellectual property represented by the design is MINE, that is COPYRIGHT JOHN FOTIADIS ALL RIGHTS RESERVED WORLDWIDE (do you hear that, Buzzfeed and Daily Mail?). I guess, it’s just one more piece of “paper architecture” to throw on the growing pile. Not the first, but in my case, perhaps the last. Any fellow architects out there will probably understand my frustration and lament.

Taking it all in stride, including the additional farce that unfolded with the publication of black and white images of this fictitious building in 2019, I’ve decided to call this particular piece of imaginary architecture “Yanni Tower”.

And in my imagination, on it’s penthouse floor, overlooking a netherworld of abstract white boxes pretending to be a city populated by gullible lemmings, the great unwashed and untalented feeble-minded masses who know only of “consumption”, themselves incapable of producing anything of value and hating those who do, and voraciously believing every media narrative slung at them by similarly untalented self-proclaimed arbiters of virtue, the sanctimonious and grievance addled “journalists”, it is the last refuge of, you guessed it, the disappearing architect.

IMAGES: First image below, font cover, Second image will be the back cover for CDs and Vinyl. 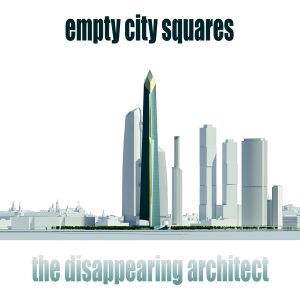 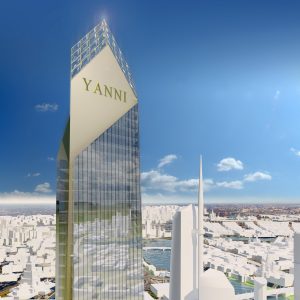